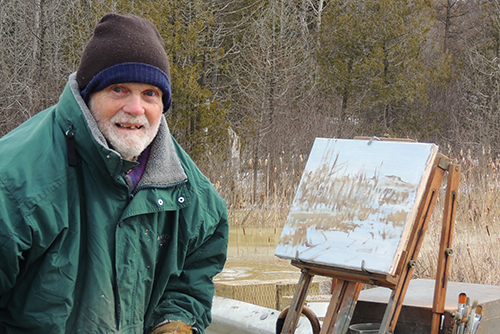 Stuart Main was born in 1934 in East Angus, a pulp and paper mill town on the St-Francis river in Québec’s Eastern Township. As a young boy, Stuart was hospitalized for a time at the Montreal Children’s Hospital. Drawing was one of the things that a child in the hospital could do. He worked for a while at the paper mill in East Angus after he completed high school. A friend encouraged him to continue his interest in art. He completed a course in illustration with the International Correspondence Schools. He went to Montreal in 1957 and worked first for Ad-Art Studios with Dave Ranson and Sol Litman. Dave was an important mentor for Stuart and they continue to share dinners and chess games regularly until Dave left to Winnipeg.

In 1958, Stuart married Violet Bennett. They lived in Montreal, then pointed Claire, while Stuart continued to work as an illustrator with Rapid Grip & Batten. In 1969, he and Violet bought a farm in the Eastern Townships close to their families, and the family moved there permanently in 1972.

At about this time, Stuart began working for Montreal Creative Center, and spent the weekends in the Townships. He began landscape painting in 1975, inspired by the work of friends and colleagues Bruce Ledain and Terry Tomalty.

He has traveled each spring to paint in the Charlevoix since the late 1970’s where he met and gathered with many artists. Painting on the south shore of Montreal with friends after work, he first met Allison Robichaud, who had recently begun painting. Alison continued to meet with group and was to become a close friend of Stuart’s.

Stuart works with oil. His work portrays the landscape primarily of the Eastern Townships, the Charlevoix, the Saguenay and the countryside around Montreal’s south shore. He has also painted Manitoulin Island in Ontario.

He is inspired by the colors of early spring and late autumn, and Québec’s rural architectural heritage. He also painted a number of western inspirated landscapes. He has done several commissioned portraits and self-portraits.

Stuart is retired in 1992, after enjoying a notable career as an illustrator for over 30 years. He has been a frequent participant in art symposiums around the province and charity auctions closer to home since that time.

He has sold his work in many galleries here, elsewhere in Canada and in the USA.